When filming Star Wars at Skellig Michael wrapped, the crew headed to Malin Head in Donegal – Ireland’s most northerly point, on the Inishowen Peninsula. Hugh Farren, proprietor of Farren’s Bar, recalls the visit well: “It was unbelievable that Star Wars was filming a mile and a half away from us. The buzz that we had for the month was surreal”. Naturally, Hugh wanted to mark the occasion, so he painted a mural of Yoda on the side of his pub. 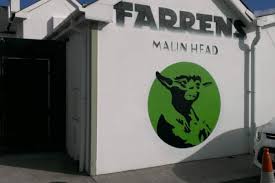 Yoda didn’t go unnoticed. During his downtime, Mark Hamill (AKA Luke Skywalker) popped into Farren’s Bar for a pint and some inter-galactic banter! And, despite heavy security, Hugh recalls that fans also flocked to Malin Head to catch a glimpse of their heroes. As one of the few pubs past the first line of security, Farren’s was often full of fans. “It was out of this world,” said Hugh. For a few weeks, Malin Head felt like a galaxy far, far away.